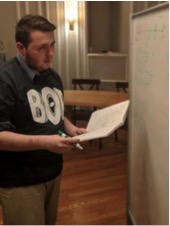 Colin Chaney found a school where it’s cool to be a nerd.

It was the spring of 2010, and they were wrestling with a tough decision: where to send their only child for middle school.

A long-time teacher with Orange County Public Schools, Dawn knew first-hand the transition from elementary to middle school could be overwhelming, especially for a kid like Colin – a perfectionist who had always preferred the company of adults over children, an individualist who shunned the latest fashion trends, and a self-sufficient creature who insisted as a second-grader on doing his homework all by himself.

Unsure that their zoned public school was the right fit but worried about the expense of private school, Dawn and John toured Orlando Science School, then in its second year as a tuition-free public charter school.

They were impressed with the school’s state-of-the-art science and language labs and the abundance of extracurricular activities that included LEGO League, Science Olympiad and two robotics teams. They loved the school’s mission: to provide opportunities and resources for children to reach their potential in all subjects, with a special emphasis on STEM disciplines – science, technology, engineering and mathematics.

And they were blown away when they heard OSS founder Yalcin Akin explain the school provided the equivalent of a private school education at no cost to families.

“We saw an opportunity,” Dawn recalled nearly eight years later. “I went online right away and registered Colin so he wouldn’t miss out.”

Colin, now 19 and a freshman at the Massachusetts Institute of Technology, can only imagine what his life would be like if he hadn’t attended middle and high school at OSS.

“OSS gave me the motivation to want to try harder, to go above and beyond what was expected,” Colin said. “I knew in elementary school that I could be working harder, but it wasn’t until I got to OSS that I felt challenged.”

Colin’s first challenge arrived when a math placement test revealed he was ready to take Algebra 1 as a seventh-grader. He and teacher Abdulkerim Akyalcin began a five-year journey that took them through Geometry, Algebra 2, Pre-calculus and Advanced Placement Calculus.

“Every day in class Mr. Akyalcin would just push us more and more,” Colin said. “He’d hand our tests back and say, ‘You need to try harder.’ ”

The challenges, both academic and social, continued with Colin’s introduction to OSS’ FIRST Robotics Competition. Over five seasons, he worked alongside other engineering-obsessed students to build a dozen robots. In the six weeks leading up to robotics face-offs with teams across the state, Colin stayed at school most nights until 8 and returned on Saturdays, programming the robots to play difficult field games.

The late nights and weekends became a bonding opportunity for Colin and his dad. John Chaney earned the nickname “transportation manager” for carting the robots to competitions. He also served as a team mentor and coach, garnering an OSS volunteer recognition award.

Colin considers joining the Nerds United for Technological Superiority team “one of the best things that happened in my life.”

“It wasn’t just about building a robot,” he said. “It was about going up against teams that may have had more resources, doing your best and trying to get others interested in STEM by showing your excitement.”

Dawn was amazed at the changes she saw in Colin. Always focused on academics, he began to blossom as he took one Advanced Placement class after another. He started to take pride in his appearance, sporting a tie with his uniform polo. And he sampled nearly all the extracurriculars the school had to offer.

“He was like a kid in a candy store,” she said. “OSS was such a perfect fit for him. It was like nerd central, but it was okay to be nerd there. In fact, it was celebrated.”

The school began in 2008 with just over 100 sixth- and seventh-graders. By 2012, it had expanded to more than 700 students in grades K-11, with 1,500 on a waiting list. Along the way, it earned accreditation from AdvancED, and was recognized by the Florida Department of Education as a High Performing Charter School.

By 2014, OSS had relocated to its current site to accommodate a still-growing population and additional after-school clubs – Odyssey of the Mind, Competition Math and Duke TIP, a program that identifies and provides resources for gifted children.

In June of that year, OSS graduated its first senior class. Ninety-nine percent earned honors and 100 percent headed for college.

The accolades kept coming. In 2015, the Washington Post rated OSS 61st on its list of most challenging high schools in the nation. In 2016, the school’s robotics, MathCounts and Science Olympiad teams all placed among the best in the state.

In 2017, the year Colin graduated, OSS received a Florida School of Excellence Award for earning a state grade of A for eight consecutive years. The robotics team represented Florida in the FIRST World Championship. The school boasted a National Merit Scholarship Finalist, a National Hispanic Scholarship Finalist and three Congressional Award medalists.

Eight members of the class, including Colin, received acceptances from Top 20 universities including Columbia, Duke, Notre Dame and Vanderbilt.

Colin, who had applied to a dozen universities, knew MIT would be making its acceptance announcement on March 14, Pi Day. But he got sidetracked with a computer game and didn’t learn until two hours after the magic moment that he’d been accepted.

“I just looked at the screen and went, ‘Is this for real?’ Then I told my mom and she started freaking out.”

Dawn continues to be amazed by her son. The once outdoors-averse kid went camping with his new college friends in October. He tried surfing. And he joined a fraternity, albeit one that prides itself on academics.

His transformation hasn’t gone unnoticed by OSS founder Akin, who considers Colin the embodiment of the school’s philosophy: If students are offered the tools to succeed when they’re young, success will become second nature to them.

“We make sure that each student is given the opportunity to thrive,” said Akin, who prior to coming to OSS worked with the National Science Foundation and participated in various U.S. Department of Energy supported projects. “Our students are given access to all the knowledge that is out there.”

Florida is home to more than 650 public charter schools in 46 of its 67 districts. They enroll more than 280,000 students, 62 percent of whom are black or Hispanic. More than half qualify for free- or reduced-price lunches. As of September 2017, the state classified 171 charter schools as academically high-performing. More information is available from the Florida Department of Education.