N.U.T.S. is going to the World Championship

Orlando Science Schools FIRST Tech Challenge (FTC) team 5070 N.U.T.S. (Nerds United for Technological Superiority) won the Inspire Award at the Florida FTC Championship. The Inspire Award is highest award a team can earn at the FL state championship; the winner of the Inspire Award receives an invitation to the FTC World Championship to be held on April 24 to 27, 2013 at the Edward Jones Dome in Saint Louis Missouri.

The Inspire Award is given to the team the judges feel truly embodies the ‘challenge’ of the FIRST Tech Challenge program. This team serves as an inspiration to what this program, and the young minds involved, can accomplish. The team that receives this award has performed well in all judging categories and was chosen by the judges as a model team. The judges used match performance, observations made during interviews and in the pit area, and the team’s engineering notebook in determining the winner.

Congratulations to N.U.T.S. and their Robot Coco for their latest accomplishment. If you know any company or local business that could be interested in sponsoring our team to the FTC World Championship, please contact Maribel Barea (Maribel.Barea@orlandoscience.org). Go N.U.T.S.! 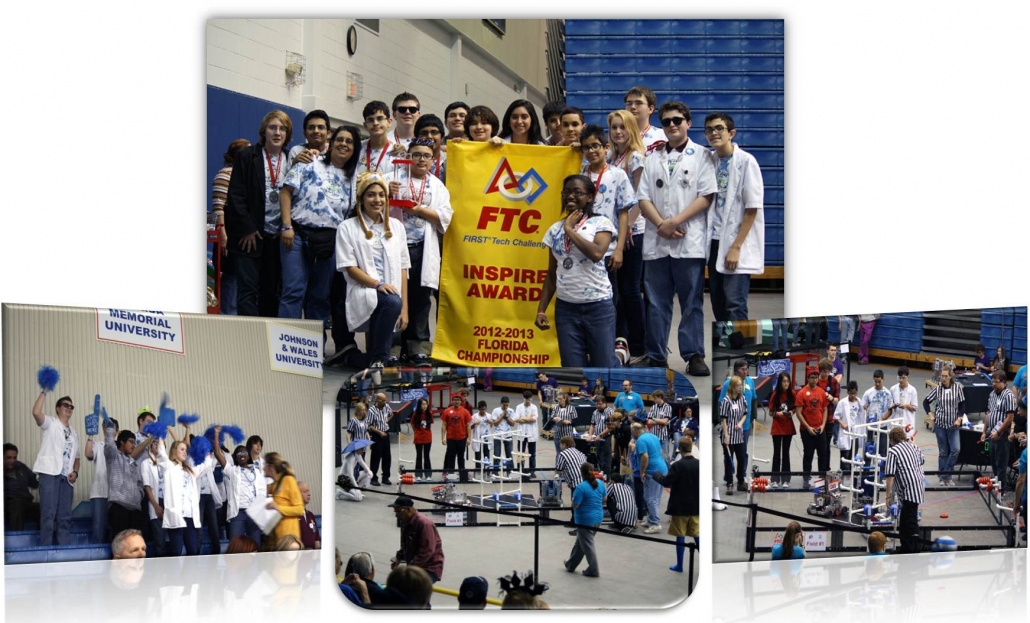 FIRST Tech Challenge is part of the FIRST programs which also include Jr. LEGO League, LEGO League and FRIST Robotics Competition. FIRST is piloting a new FTC competition format in 5 regions including Florida. Teams in close proximity are grouped in Leagues. OSS FTC teams compete in the Tesla Robotics League, which is composed of Central Florida teams. FTC Team 5070 N.U.T.S. (Nerds United for Technological Superiority) and FTC Team 6379 Nerdvana participated in the Tesla Robotics League Championship on February 2nd, 2013. Nerdvana won the Connect Award. The Connect Award is presented to the team that the judges feel is most connected with both their local and engineering communities. The best team is more than the sum of its parts, and recognizes that their schools and communities play an essential part to their success. The recipient of this award is recognized for helping the community understand FIRST Tech Challenge and the team itself. In addition, the team that wins this award is aggressively seeking engineers and exploring the opportunities available in the world of engineering, science and technology.

N.U.T.S. won the Rockwell Collins Innovate Award which celebrates a team that not only thinks outside the box, but also has the ingenuity and inventiveness to make their designs come to life. This award is given to the team the judges feel has the most Innovative and creative robot design solution to the game challenge. This award may address the design of the whole robot or just a sub-assembly attached to the robot. To be considered for this award the creative components can’t just look good – they’ve got to work. at least most of the time. A team’s engineering notebook must show the design of the component and the team’s robot, and succinctly describe how the team arrived at that solution.

N.U.T.S. also won the Finalist Alliance Trophy for being the second team in the runner up alliance of the final championship matches. After all league championship are played, the top 24 teams in the state advance to the State Championship. N.U.T.S. was 24th in the state earning a spot at the FTC State Championship to be held at Embry-Riddle Aeronautical University (Daytona) on Saturday, March 2, 2013. The event is open to the public, come and cheers N.U.T.S. as they compete for a spot in the FTC World Championship. 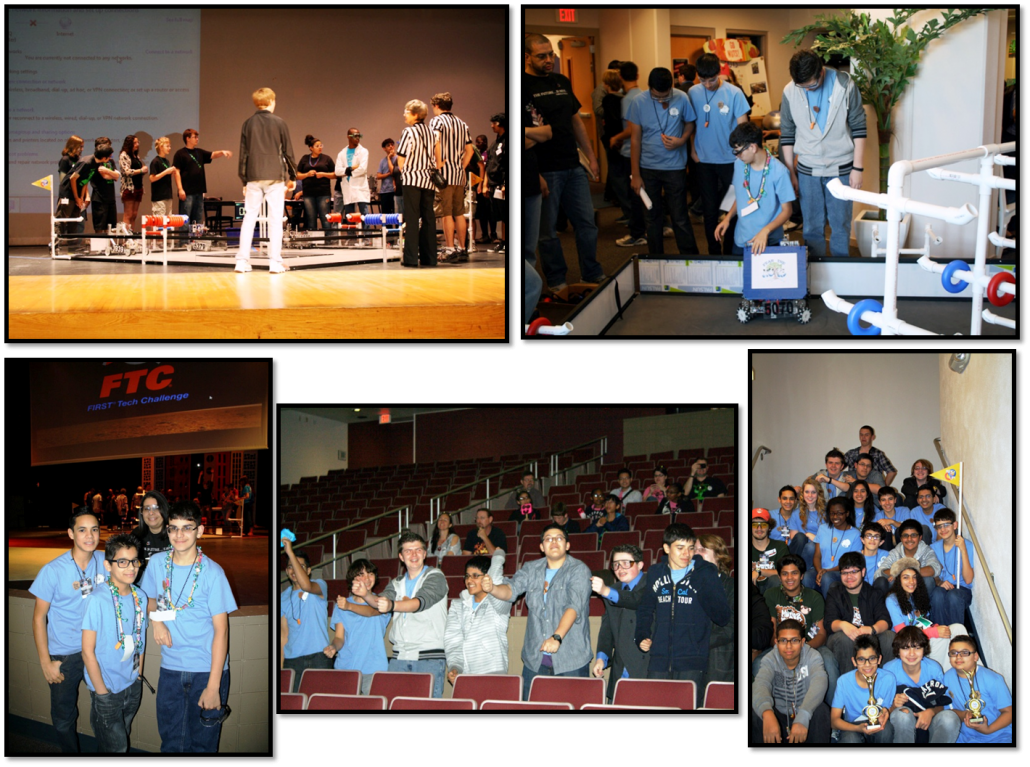 Orlando Science Schools hosted on Saturday October 20, 2012 a FIRST Tech Challenge (FTC) Built It Day. 8 teams from Central Florida came to our school to share experiences as they worked on their robots.Four workshops were offered, our students and mentors from FTC 5070 N.U.T.S. presented workshops in robot programing and computer aided design (CAD). Experience teams helped and encouraged rookie teams to complete their robot and participate in the first meet, which they did.

FIRST Tech Challenge is part of the FIRST programs which also include Jr. LEGO League, LEGO League and FRIST Robotics Competition. FIRST is piloting a new FTC competition format in 5 regions including Florida. Teams in close proximity are grouped in Leagues. OSS FTC teams compete in the Tesla Robotic League, which is composed of Central Florida teams. Under the new system, league tournaments are called Meets. We at Orlando Science Schools are helping shape the future of FIRST robotics competition by hosting the first Build It Day and Meet of the Florida FTC Tesla Robotic League.

OSS also hosted a FTC meet on Saturday November 17, 2012. 9 teams assisted to our meet, including all the teams that came to our built it day. The OSS FTC teams competed, 6379 Nerdvana and 5070 N.U.T.S. Nerdvana won third place in performance and third place in Judging. N.U.T.S. won second place in judging. Thank you to Orlando Science Schools, its faculty and staff, all the volunteers from the Tesla Robotics League and the parents from FRC 4013 Clockwork Mania who made these events possible. 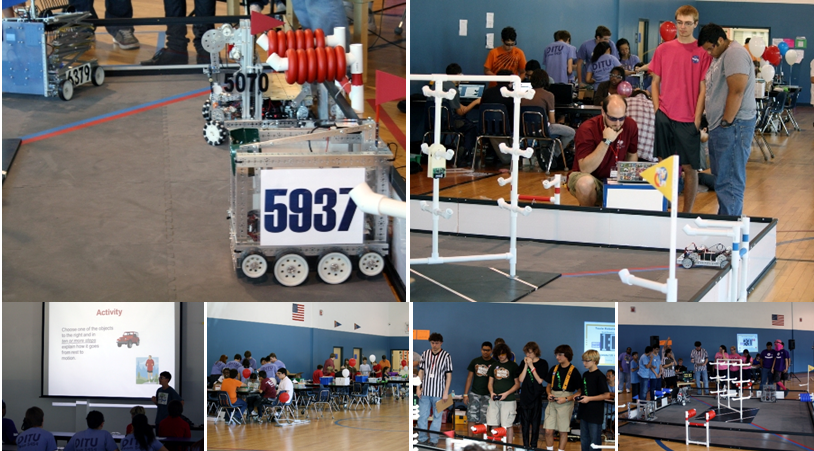 Orlando Science Schools hosted for a third year in a row a FIRST LEGO League qualifying tournament. OSS Legolympics 2012 was attended by 12 teams, including teams from the Ocala and Tampa area. Two of our very own FLL teams participated in the tournament, the Robo Builders (OSES) and the Robotic Pandas (OSS). The teams showed their robotic creations in the field and to the judges, danced and singed along to the music, had fun with FLL Core Values and shared their project to help seniors. This year FLL competition is titled Seniors Solutions; the goal is to improve the quality of life for seniors by helping them continue to be independent, engaged, and connected in their communities.Legolympics 2012 was a success, allowing these young future scientists to learn while having fun. Thank you to all the volunteers that made this event possible, including our FRC and FTC teams. The event was hosted by FRC 4013 Clockwork Mania and FTC 5070 N.U.T.S. 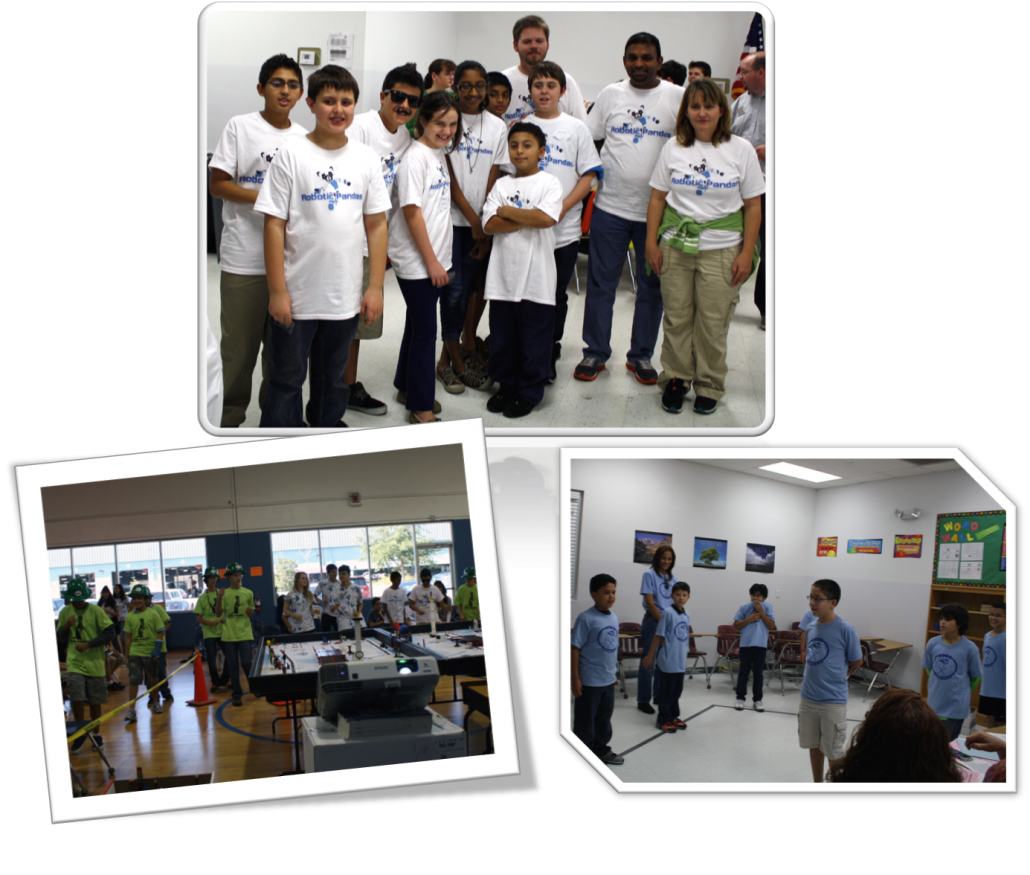 OSS Team 4013 Clockwork Mania competed at the FIRST World Championship held in St. Louis Missouri from April 25 to April 28, 2012. There are over 2,000 FRC teams in the world. Only 400 of those get to participate in the World Championship.

Clockwork Mania advanced to the World Championship in their rookie year, a feat that has taken other veteran teams much longer to accomplish. FRC is a competition geared towards high schools students; our team is composed of 8 and 7 graders. We knew that OSS had some of the best students in Orange County. Our academic athletes have shown they are among the best in the state and the nation. Now Clockwork Mania accomplishments have demonstrated that we have some of the best talent in the world. OSS is very proud of Clockwork Mania. The followed team members represented OSS at the FIRST World Championship: Carlos Barea, Sebastian Orellana, Edwin Cruz, Camila Berrios, Mashnun Munir, Brandon Delfosse, Daniel Stetzinger, Nikhil Mahalonobis, and their robot Sir Clockworth, they were accompanied by Mr. and Mrs. Barea, Mr. Orellana, Mrs. Mahalanobis, and Mr. Kaya. The team already started to work on next year competition by planning fundraising and activities to promote the team, FIRST (www.usfirst.org) and robotics. Stay tune for more news from Clockwork Mania in the near future. 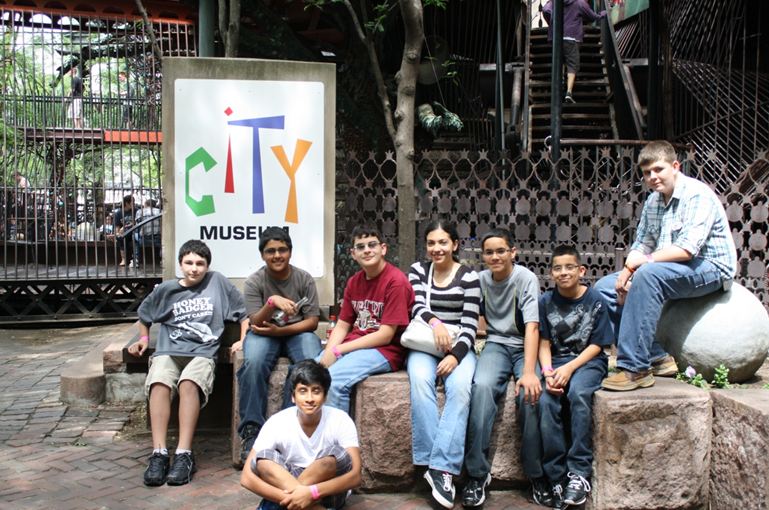 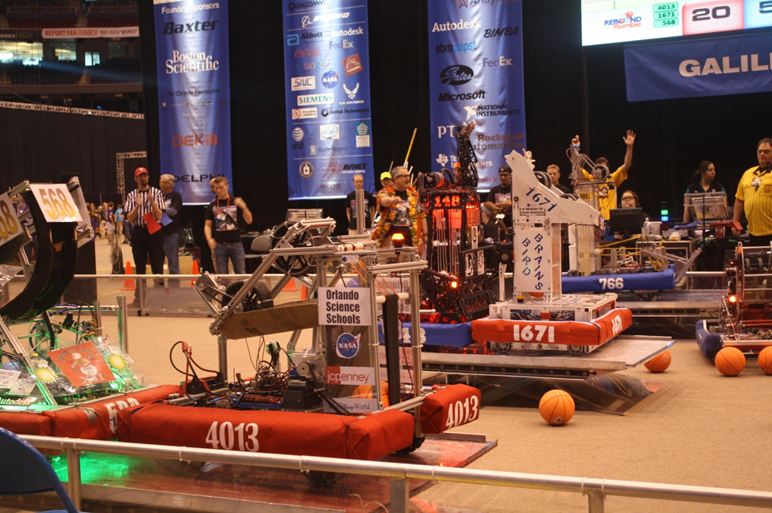 Orlando Science Schools FIRST Robotics Competition (FRC) Team 4013 Clockwork Mania won the Rookie All-Star Award at the Orlando Regional tournament held at the University of Central Florida from March 8 to March 10, 2012 (http://www2.usfirst.org/2012comp/Events/FL/awards.html).
The Rookie All-Star Award celebrates the rookie team exemplifying a young but strong partnership effort, as well as implementing the mission of FIRST to inspire students to learn more about science and technology. This is the highest award a rookie team can earn. By winning this award, the team earned the right to compete at the FIRST world championship; the premier robotics competition in the world, to be held in St. Louis Missouri in April. FIRST stands for “For Inspiration and Recognition of Science and Technology” (www.usfirst.org). Clockwork Mania has another regional tournament in March at the Florida Atlantic University in Boca Raton Florida. This elite team is composed of Carlos Barea, Sebastian Orellana, Edwin Cruz, Anthoney Faraday, Camila Berrios, Mashnun Munir, Brandon Delfosse, Daniel Stetzinger, Andrew Lin, Nikhil Mahalonobis, and their robot Mr. Cogsworth. The team is mentored by Mr. and Mrs. Barea, Mr. Orellana (parents) Mr. Mahalanobis, and Mr. Kaya (teacher). Now the team has to raise the funds to cover the world championship tournament and travel expenses. Stay tune for upcoming announcements on how you can support Clockwork Mania represent OSS at the world championship. 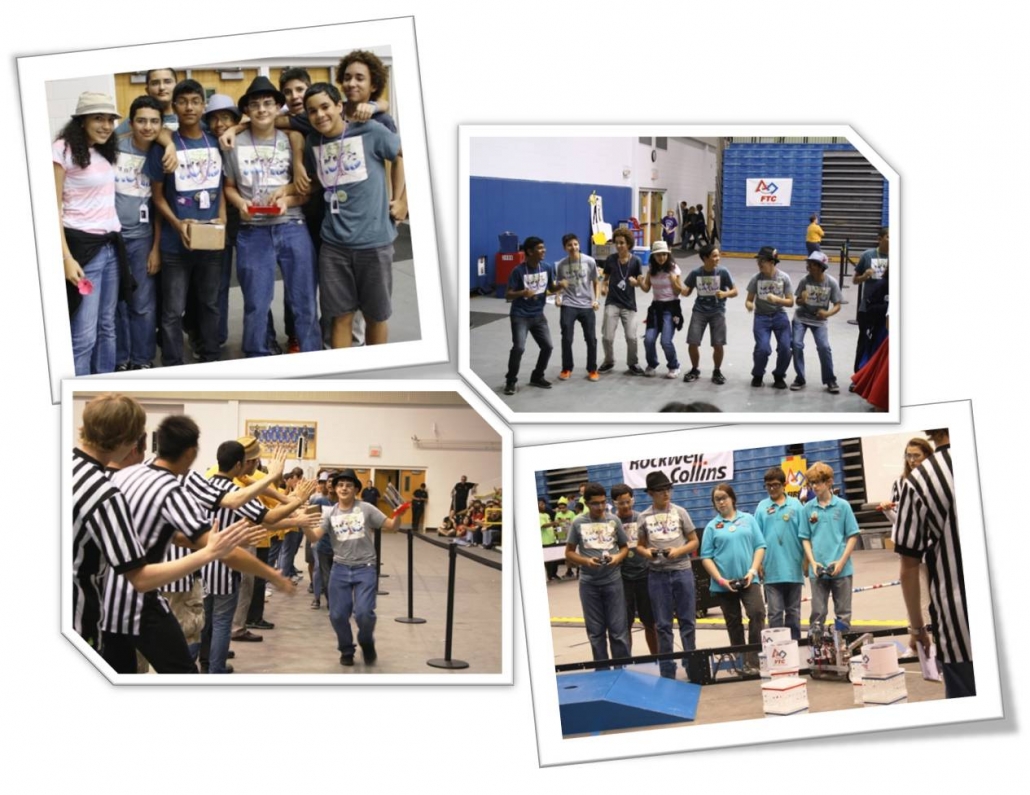 On February 18, 2012 the Orlando Science School FIRST Tech Challenge Team 5070 N.U.T.S. (Nerds United for Technological Superiority), participated in the FTC Florida Championship at Embry-Riddle Aeronautical University in Daytona Beach. There were some technical challenges, but the team was able to overcome them; the robot Pistachio and the driving team performed well in all the matches. The team was a finalist for the Think Award and earned the Judges Award, in the Judge’s opinion, N.U.T.S was the best rookie team.

To put this achievement in perspective, only 32 teams out of 75 in the state earned a ticket for the FTC State Championship which is a competition geared to high schools and our team is mainly composed of middle school students, a testament to the caliber of OSS students. Congratulate N.U.T.S for representing so well the OSS family. The team members are: Carlos Barea, Sebastian Orellana, Sebastian Gonzalez, Mohammed Abdullah, Ahmed Rashid, Sanmmit Shinde, Anthoney Faraday, Pruthvi Patel and Camila Berrios. They are coached by Maribel Barea, Hector Barea, Paul Orellana and Mr. Kaya. Go N.U.T.S.! 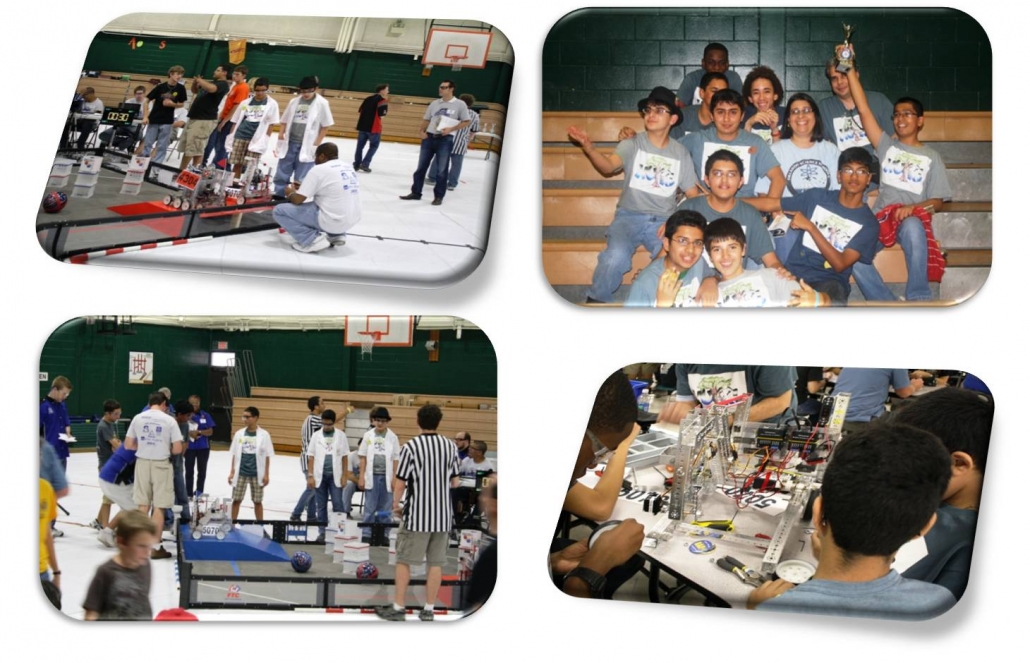